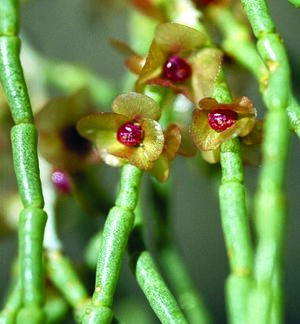 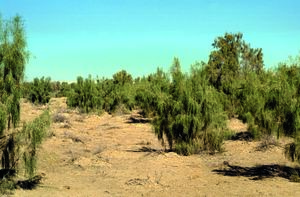 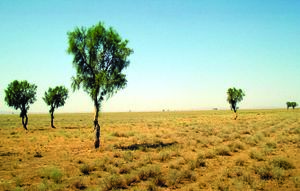 Haloxylon aphyllum, plantation of 40-year-old trees, under supervision of Mrs Galina Sergeiva (near Tanichka, on track to Tutlee village, (Karnabchol) 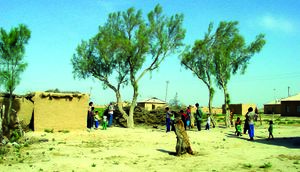 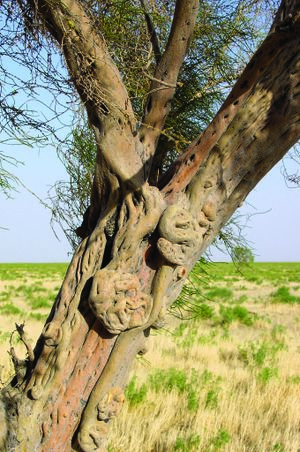 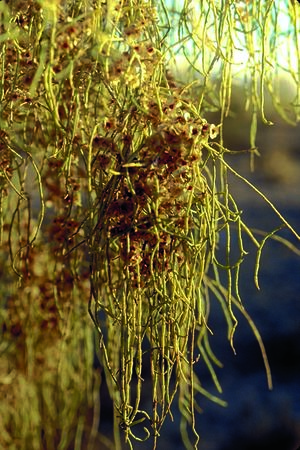 Pastoral importance: One of the most important range plants in Middle and Central Asia to northern China. Young vegetative stems, leaves and fruits are a valuable feed for all livestock nearly all year round. In autumn and winter the fruits and annual shoots have the best value; shepherds consider the fruits to be a highly calorific forage. Extensively used for the creation of long-term pastures, for range restoration and/or improvement, in tugaï communities on sandy soils, takyr, salt-marshes (solonchakalkaline soils), also appropriate for sand-dune fixation and creation of a wind belt. Expected yield in Artemisia Karnabchol steppe varies from 0.8–3.0 t/ha on highly fertile soils (Taninchka, Gombasa wells) to 0.3–1.4 t/ha on infertile ones; 0.6–0.8 t/ha in the Kyzylkum. Seed production yields 0.05–0.3 t/ha at 5– 6 years. Trees planted in 1960–70 for range improvement, now intensively used by local populations as much needed fuelwood.

Economic interest: Fodder, useful for sandfixing, soil-improving, fuel, coal-making (up to 40%). Local people extract acetone, alcohol and vinegar from the wood. Ash of green younger branches (‘ichkara’) is widely use for dyeing wool dark brown. Large living collection of some 50–60 accessions of Middle and Central Asian species in the arboretum of the Papanay Karakul Sheep Station in Nuratau province. There is an urgent need for reforestation and establishment of new plantations using ‘Saxaoul’ for the future of local populations in remote desert areas.