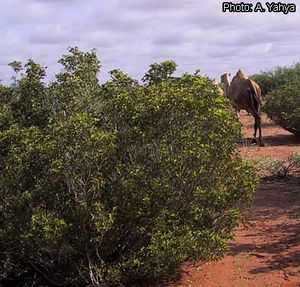 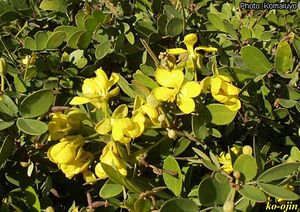 Cordeauxia edulis is endemic to south-eastern Ethiopia (eastern Ogaden) and central Somalia. It is cultivated on a small scale in Somalia and near Voi in Kenya, where it was introduced in the 1950s. It has been introduced on an experimental scale into Sudan, Tanzania, Yemen, Israel and the United States.

In its native region the seeds (‘yeheb nuts’) of Cordeauxia edulis are an important food for pastoralists, especially as a famine food during drought periods. They are eaten fresh, dried, roasted or boiled. The seeds taste sour when eaten fresh or dried, but have a sweetish, agreeable, chestnut-like taste after roasting. The water in which the seeds have been boiled is sweet and is sometimes consumed. The seed oil is useful for soap making. The seeds have been mentioned as a coffee substitute. Cordeauxia edulis is said to regulate gastric secretion and to permit treatment of ulcers due to hot food. It is also believed to alleviate anaemia by augmenting the number of red blood cells. The leaves are made into a tea. Cordeauxia edulis is an important dry-season fodder for camels, goats, sheep and cattle, but in the rainy season other plants are preferred. The red pigment in the glands on several plant parts forms vividly coloured, fast and insoluble combinations with many metal mordants, and is locally used for dyeing textiles. The wood is used as firewood.

The seeds of Cordeauxia edulis are mostly consumed locally, but are also sold in towns. Demand exceeds supply because of rapidly diminishing plant populations. From Ethiopia the seeds are exported to Somalia and Arab countries, but no quantitative information is available. Cordeauxia edulis seeds have export potential for European markets as ‘dessert nuts’.

The red pigment of Cordeauxia edulis is cordeauxione (cordeauxiaquinone), a naphthaquinone which is unknown in other plants. The leaves contain 0.7–0.8% of this dye. When fresh leaves are handled, they stain the hands red. When animals eat the leaves, their teeth are stained orange-red and the dye is also deposited as a calcium complex in their bones, which become pink. This colouration is considered a sign of good meat quality, e.g. in Somalia and Saudi Arabia. The wood of Cordeauxia edulis has been described as good firewood, inflammable even when wet.

Cordeauxia comprises a single species. It is closely related to Caesalpinia and Stuhlmannia. Cordeauxia edulis is rather variable, and sometimes two types are distinguished: ‘suley’ (‘sulei’) and ‘moqley’ (‘mogollo’). ‘Suley’ is pale green, with a large stem diameter and large leaflets. ‘Moqley’ is dark green, with small stem diameter and small leaflets. Pods of the ‘moqley’ type contain a large single seed. Pods of the ‘suley’ type contain several seeds, which are compressed laterally and smaller in size. The seeds of the ‘moqley’ type are claimed to be sweeter. Mixed stands of the two types exist but are rare.

The leaves of Cordeauxia edulis have an extremely thick cuticle and mesophyll consisting of palisade cells with lateral walls capable of folding in a concertina-like way. This may enable the leaves to survive extended periods of drought and store water quickly when available, thus allowing them to remain evergreen.

Germination of Cordeauxia edulis is rapid. Subsequent growth of the aerial parts is very slow, especially in the seedling stage, whereas the root system grows rapidly. Plants 60 cm tall may already have roots 2 m long. Under natural conditions flowering starts just before the onset of the rains, when the relative humidity rises, or immediately after the first rains, whereas some sources indicate flowering is year-round but more profuse during the rainy season. The floral parts fall soon after pollination, leaving only the fertilized ovary. The fruit ripens 10–15 days after flowering. Unlike in many other plants, seeds of Cordeauxia edulis mature when the plant moisture content is at its peak. Fruit development stops when the rain ceases and the ovaries remain dormant for 4–5 months, resuming ripening after the rains have returned. Cordeauxia edulis requires 3–4 years to bear fruit. The plants are long-lived, some reaching more than 200 years according to Somali sources, and they coppice well. It is unclear whether Cordeauxia edulis is able to fix atmospheric nitrogen.

In Ethiopia and Somalia Cordeauxia edulis is found in semi-desert regions in Acacia - Commiphora deciduous bushland and shrub vegetation at (100–) 200–500(–1000) m altitude, with a minimum distance of 100 km to the Indian Ocean. These regions have an average annual temperature of 26–30°C, an average annual rainfall of 100–300(–400) mm and two rainy seasons.

Cordeauxia edulis is normally propagated by seed, but vegetative propagation through stem cuttings is also possible. The 100-seed weight is 100–300 g. The seed is often said to be viable for a few months only, but seed coated in wood ash and stored in a sack is reputed to remain viable for at least a year. Direct sowing in the field seems preferable, as the fast-growing taproot is easily damaged in transplanting, with mortality rates of up to 100%. No information is available on optimum plant densities and spacings. Under natural conditions in Somalia there are up to 320 plants/ha, depending on growing conditions and distance from villages and water points.

Cordeauxia edulis is usually collected from the wild. Ample water is needed for seedling establishment, but once the plants are established, little care is needed.

Cordeauxia edulis shrubs are essentially free of insect pests, but storage pests, such as weevils and larvae of moths, heavily attack the seeds.

Cordeauxia edulis fruits are picked from the plant, the fruit wall is peeled off and the seeds are placed in sacks. The seeds are often harvested before maturity, which may be a factor in the low seed viability often encountered. Usually all seeds are removed from the plant at the same time, hampering regeneration of natural stands. Fruits can be harvested twice a year, provided rainfall is adequate during both rainy seasons.

The seed yield of Cordeauxia edulis is 5–8 kg per plant per year, but may be zero in drought years. The estimated average forage production is 325–450 kg/ha (1.4–2 kg/plant).

To prevent Cordeauxia edulis seeds from being attacked by insects, freshly picked seeds are roasted or boiled to kill insects and harden the seed coat. In this form they fetch a higher price on the market, but the practice contributes to the difficulty of obtaining viable seed for planting. Pastoralists keep the seeds for many years in containers made of tanned, dried camel leather. For dyeing, Somalis pulverize about 200 g of dried leaves in water to dye about 10 m2 cotton cloth. Alkaline extracts develop a more intense violet colour than neutral or slightly acid extracts.

The populations of Cordeauxia edulis declined in the 20th century due to deterioration of the vegetation caused by overgrazing, and overharvesting of the seed. In the IUCN Red List of Threatened Plants (1997) Cordeauxia edulis is classified in the category ‘rare’, which includes taxa with small world populations that are not at present considered endangered or vulnerable, but are at risk. Regeneration and protection of natural stands and cultivation in afforestation projects, in and outside its native region, are recommended. Germplasm collections are seriously lacking, with one accession kept in Ethiopia at the International Livestock Research Institute (ILRI), Addis Ababa, one in Kenya at the National Genebank of Kenya, Kikuyu and one in the United States at the Southern Regional Plant Introduction Station, Griffin, Georgia.

Cordeauxia edulis is a useful multipurpose plant in dry areas of Ethiopia and Somalia. Natural stands are threatened by over-exploitation, and protection of natural stands as well as expansion of its cultivation are called for. Cordeauxia edulis could be a promising potential source of food and dry-season fodder for other hot, arid regions. However, the limited availability of viable seed and the shortage of knowledge on the crop, especially its propagation, agronomic practices and potential for selection and breeding, are important constraints.