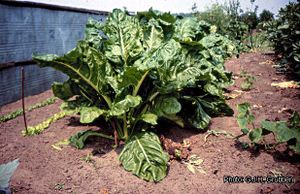 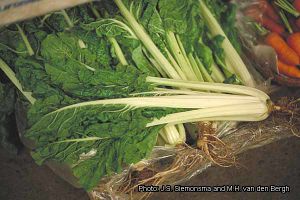 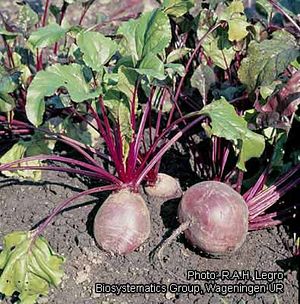 plants of the Garden Beet Group 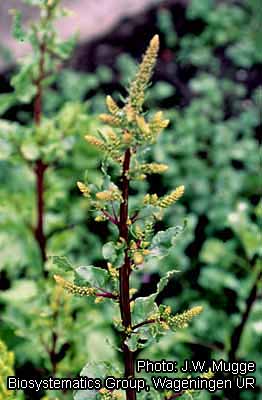 Wild forms of Beta vulgaris occur along the shores of the Mediterranean, extending eastwards as far as Indonesia, and westwards along the coasts of the Atlantic up to the Canary Islands and southern Norway. Beta vulgaris grown for its leaves was taken into cultivation in the eastern Mediterranean or the Middle East and is first mentioned in the literature in Mesopotamia in the 9th century BC. Recipes for roots of beet date from the 3rd century AD, but true garden beets appear in Europe as late as the 16th century. Little is known of the development and early distribution of Swiss chard. Presently, beets are grown for their roots (garden beet), petioles (Swiss chard) and leaves (spinach beet) throughout the world. Garden beet is the most important form worldwide and can be found in all African countries, more in the cooler parts of East and southern Africa than in the lowlands, and mostly as a relatively minor market vegetable around the big cities. In most African countries spinach beet/Swiss chard is far more important than garden beet, which is primarily consumed by Europeans. Two other cultivated forms of Beta vulgaris, fodder beet and sugar beet are of no importance in tropical Africa.

Spinach beet leaves are eaten as pot herb. Young leaves of the garden beet are sometimes used similarly. The midribs of Swiss chard are eaten boiled while the whole leaf blades are eaten as spinach beet; in Africa the whole leaf blades are usually prepared with the midribs as one dish. The usually deep-red roots of garden beet are eaten boiled either as a cooked vegetable, or cold as a salad after cooking and adding oil and vinegar. A large proportion of the commercial production is processed into boiled and sterilized beets or into pickles. In eastern Europe beet soup is a popular dish. Yellow-coloured garden beets are grown on a very small scale for home consumption. In Africa the leaves are preferred to the roots.

Roots and leaves are used medicinally against infections and tumours, and Swiss chard as a hypoglycaemic agent by diabetic patients. Garden beet juice is a popular health food, although it is not important in tropical Africa. Betanins, obtained from the roots, are used industrially as red food colourants, e.g. to improve the colour of tomato paste, sauces, desserts, jams and jellies, ice cream, sweets and breakfast cereals.

Forms with strikingly coloured, large leaves are grown as ornamentals.

Europe and North America produce the bulk of the garden beet crop and their combined annual commercial production amounts to 900,000 t (excluding Eastern Europe). Spinach beet is important in northern India and parts of South and Central America, as well as in Italy. In tropical Africa, beet crops are grown on a limited scale for home consumption and for local markets, but no production data are available.

The colouring agents in garden beet are not anthocyans, but glucopyranosides, mainly beetroot red or betanine (C24H27N2O13- E162). It is water soluble and sensitive to high temperatures, oxygen and light. Beets also contain geosmin, which causes the typical earthy smell.

At present it is quite generally accepted that the cultivated taxa of the genus Beta all belong to Beta vulgaris L. subsp. vulgaris. However, there is disagreement concerning the infraspecific classification and the classification of related wild taxa, together constituting section Beta. The most recent revision of the wild taxa within section Beta distinguishes 3 species: Beta vulgaris L. (with subsp. adanensis (Pamukç.) Ford-Lloyd & J.T.Williams, and subsp. maritima (L.) Arcang.), Beta macrocarpa Guss. and Beta patula Aiton. There are almost no barriers to gene exchange between the wild and cultivated taxa and a pattern of continuous morphological variation is present.

– Leaf Beet Group (in other cultivar-group classifications divided into Swiss chard or Flavescens Group, and Spinach beet or Cicla Group, but many intermediate types exist).

For the vegetable types, some cultivars recommended for the tropics are:

Beets are biennial plants requiring vernalization for flower induction. In cultivars of temperate areas, 4–10°C for 2 weeks is sufficient to induce flowering. The low-temperature requirements in tropical selections are less. Long daylengths further promote flowering. Flowering in garden beet is also stimulated by high temperatures, which may lead to flowering during the first year in the tropics. This risk does not occur in leaf beet. When grown for seed production, flowering can be obtained by using vernalized seed or seedlings. Pollination is mainly by wind, though flowers produce nectar and are visited by insects, especially thrips. Beets are self-incompatible.

Temperatures above 25°C adversely affect growth and colour development of garden beet. An elevation of 600–1000 m in the tropics is the minimum for profitable production. Leaf beet tolerates higher temperatures.

Beets require a fertile, moist soil for good growth. They prefer a neutral to slightly alkaline pH. As they originate from seashores, they are tolerant of limited concentrations of salt and can be irrigated with slightly saline water.

Beets are propagated by seed. The seeds are clustered into glomerules or seedballs. Monogerm seed of modern cultivars is commercially available, obtained through breeding or by mechanical splitting of the seedballs. The 1000-seed weight is 5–10 g, the weight of 1000 seedballs 13–22 g. Seed production in the tropics is difficult and seed is normally imported. Beet root crops are mostly direct-seeded, 2–3 cm deep in rows (12.5–)25–30(–50) cm apart, or broadcast and thinned to 10–20 cm. Some gardeners however may sow beetroot in a nursery and transplant. When whole seedballs are sown, each resulting in 2–5 plants, thinning to single plants is necessary. The plant density depends on the purpose of the crop. For young, high quality minibeets the plant spacing may be as close as 12.5 cm × 5 cm, whereas for a crop of mature garden beets the plant spacing can be 25 cm × 10–13 cm. Spinach beet is sown in rows 15–20 cm apart. Thinning in the row at a rather close distance, 2–10 cm, or no thinning is practised. Swiss chard for early production of the complete plants is sown in rows 20 cm apart and thinned in the row to 5–10 cm. For long-term continuous picking of big leaves it is sown in a nursery and plants of 25 days are transplanted at 30 cm × 30 cm on beds, or at 25 cm × 45 cm so that people can walk between the rows.

Relatively large amounts of fertilizer are important for profitable yields. A normal application is 100 kg N, 50 kg P2O5 and 200 kg K2O per ha. Nitrogen can be given as NaNO3 in slightly acidic soils, or where available Na is limited. After picking the first leaves, a top dressing with sulphate of ammonia (for soils with high pH) or calcium ammonium nitrate (for soils with low pH) should be applied; this top dressing to be repeated every 4–6 weeks. Where boron deficiency causes stunted and slow growth, 10–30 kg/ha of borax can be applied. However, too much boron may be toxic to the subsequent crop. For good growth, moist soil is required. Irregular rainfall or inadequate irrigation may cause yellowing of leaves, or leaves that become coarse or bitter, whereas for garden beet it causes cracking of the roots.

Beets are generally not seriously attacked by diseases or pests, but leaves of spinach beet can be seriously affected by leaf spot caused by the seedborne fungus Cercospora beticola, resulting in small round spotting of the leaves, aggravated by high air humidity. For this reason farmers avoid growing this crop in high-rainfall areas unless when they are able to spray with dithane or similar chemicals at intervals of 7–10 days. Other seedborne fungus diseases are downy mildew (Peronospora parasitica) on the leaves and Phoma betae causing damping-off. Pythium and Rhizoctonia also cause damping-off.

Larvae of several species of beet web worms feed on leaves and produce webs. Occasionally aphids and beet leafminers are a problem. Beets are very susceptible to Meloidogyne root-knot nematodes, controlled by crop rotation and by large applications of organic manure.

Garden beets are harvested by uprooting with their leaves and tied into bunches of 3–5. The time from planting to harvesting depends on the size of the roots preferred. Minibeets with a diameter of 3–4 cm can be harvested about 2 months after sowing, full-size beets after 3–4 months.

Leaf beet is usually harvested by cutting the large outer leaves with a knife. Harvesting of leaf beet can start about 45 days after sowing and can continue for up to 2 years in fertile soil.

With good cultivation techniques garden beet in the tropics may yield 15–25 t/ha. Leaf beet may yield up to 100 kg per bed of 10 m2.

Garden beet can be stored for more than 6 months under cool, well-ventilated conditions, provided the leaves are removed. The optimum temperature is 0–4°C at a relative humidity of 90–95%. Industrially, beets are preserved after steam-boiling and skinning and addition of vinegar, either as whole minibeets or sliced. Leaf beet is a typical fresh market product, but can be kept for some days in a cool store.

The International Beta Database (IDBB) is maintained by the Genebank of the Federal Centre for Breeding Research on Cultivated Plants, Germany. The IDBB serves as the central link within the World Beta Network (WBN). Genetic material collected for breeding work in sugar beet and fodder beet can also be used in breeding vegetable beets. The genus Beta has a high priority for IPGRI since diversity is rapidly eroding.

Breeding work is done in many temperate countries, but also in southern China and northern India. Breeders of garden beet aim for rapid root formation, limited leaf production and petioles narrow at their base, good homogeneous colour, good shape, appearance and taste, and no bolting in the first year.

Leaf beet with its high productivity and high nutritional value, merits more attention as market vegetables in the cooler parts of the tropics. Cultivars with resistance to high temperatures are needed. Garden beet is mostly grown for the European market. The good transport and storage characteristics are commercially attractive.