1, part of stem with leaf; 2, inflorescence. Redrawn and adapted by Iskak Syamsudin 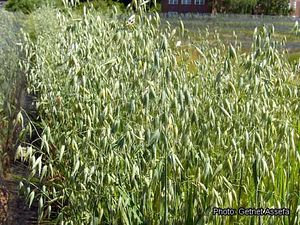 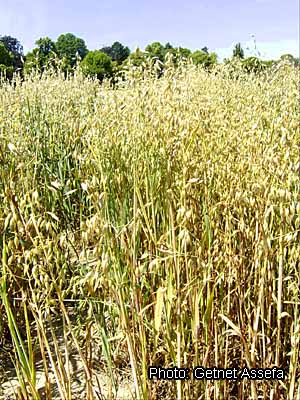 Avena sativa is only known in cultivation and its exact origin is unclear. Oat was not cultivated as early as wheat and barley and probably it persisted as a weed in fields of these cereals for centuries before it was taken into cultivation. Oat seeds have been found in 4000-year-old remains in Egypt, but these were probably from weeds and not from cultivated oat. The oldest known cultivated oat remains were found in caves in Switzerland that date back to around 1000 BC. Avena sativa probably evolved in central or northern Europe from wild Avena sterilis L. germplasm from south-western Asia. Nowadays oat is extensively cultivated in northern temperate regions, mainly in Europe and North America. In tropical Africa it is mainly grown in Ethiopia and Kenya. It is also cultivated in South Africa, Morocco, Algeria and Tunisia.

Oat has been used as food and fodder since ancient times. Oat grain is an ingredient in a wide range of food products including breakfast cereals, porridge, cookies, breads and muffins, crackers and snacks, beverages, meat extenders and baby foods. Oat grain is considered to have potential as a source of good edible oil. In Ethiopia oat is made into ‘injera’ (pancake-like bread), ‘tella’ (local beer) and other products. In industrialized countries oat grain mainly finds application as animal feed, especially for horses, but also for cattle, sheep, turkeys and other animals. The green plant is good forage; it makes good hay and silage or is grazed by animals. The straw too is used as forage, e.g. in Ethiopia, where it also serves as bedding for livestock, fuel and roofing material for traditional houses. Also in Kenya oat is used as food and as fodder. A field sown for grain production can be used for grazing if rains are inadequate; on the other hand fields are sometimes grazed to delay grain development.

In Australia oat is planted for sand binding on dunes. An important industrial utilization is the use of oat hulls for the production of furfural and other furan compounds, utilized in the production of fungicides, disinfectants and preservatives. Oat products also find application in the cosmetic industry as talc replacements and in skin care products. Oat flour has anti-oxidant properties and has been used for food conservation, but it has largely been replaced by synthetic chemicals.

The soluble fibre in oat bran is believed to reduce blood cholesterol in humans, due to the presence of β-glucan. Oat has shown hypoglycaemic activity and beneficial effects on gastro-intestinal functions. Oat bran seems to protect against dental caries. Compounds contributing to the antioxidant properties of oat flour include glyceryl esters of hydroxycinnamic acid, ferulic acid and caffeic acids. Oat seems to be tolerated by most coeliac patients, although concerns remain.

Avena comprises about 30 species, which are diploid (2n = 14), tetraploid (2n = 28) or hexaploid (2n = 42). All hexaploid Avena species belong to section Avena. The hexaploids Avena sativa, Avena byzantina C.Koch (red oat), Avena fatua L. and Avena sterilis L. are interfertile. Avena byzantina is closely related to Avena sativa and possibly derived through selection from the latter. Some authors include Avena byzantina in Avena sativa. Avena byzantina is cultivated mainly in southern Europe. In tropical Africa it has been grown experimentally in Kenya and has been recorded as a weed in Tanzania. It has naturalized in South Africa, where it is found in disturbed locations and on roadsides. Avena fatua and Avena sterilis are important weeds of cereals, e.g. in Europe, Ethiopia and Kenya, and differ from Avena sativa in their shattering spikelets and hairy lemmas. The tetraploid Avena abyssinica Hochst. can be distinguished from Avena sativa by the two bristles at its lemma tip.

Avena sativa is variable, which is reflected in elaborate infraspecific classifications, mainly based on inflorescence and lemma characteristics.

Oat seeds start to germinate 7 days after sowing. Seedlings start tillering 35–45 days after sowing. Up to 12 leaves are produced per stem. The time from sowing to flowering depends on sowing time, e.g. in north-western Europe it is 100 days for spring-sown crops to 270 days for autumn-sown crops. Oat is largely self-pollinated with up to 1% outcrossing. The time from flowering to harvesting is about 60 days in north-western Europe. The total crop duration is 3–6 months in Ethiopia and Kenya, and 6–11 months in temperate regions. Shattered seeds remain viable in the soil for a long time, which may result in weedy growth in subsequent crops.

Oat is mostly grown under cool and moist conditions in cool-temperate regions, mainly as spring-sown and to some extent autumn-sown crop. In tropical Africa it is mostly grown in mid- to high-altitude areas (1600–3000 m altitude), with an annual rainfall over 800 mm and minimum and maximum air temperatures of 6°C and 24°C, respectively. In Ethiopia it is usually grown at 2700–3000 m altitude. Oat is not as sensitive to frost as wheat. When moisture is not limiting it also performs well in warmer, humid mid-altitude tropical environments. Oat needs more water than any other cereal except rice. It is generally a quantitative long-day plant, but differences in photoperiod-sensitivity exist among cultivars, with particularly strong responses in northern European cultivars. Vernalization responses have also been recorded.

Oat thrives on a wide range of soil types, as long as drainage is sufficient. It grows on soils that are sandy, low in fertility, or highly acidic (as low as pH 4.5), but it performs best on well-drained, fertile, loamy soils.

Oat is propagated by seed. The 1000-seed weight is 22–37 g. Seeds 2–3 months old normally have more than 85% germination. Oat seeds kept under natural cold conditions in the highlands of Ethiopia still germinated after 15 years of storage. Under tropical highland conditions, the seeds are broadcast or drilled (row spacing 15–20 cm) at a recommended rate of 60–120 kg/ha, with drilled crops and crops intended for grain production at the lower end of the range. In Kenya oat is normally sown with a wheat drill in rows 20–25 cm apart, at a seed rate of 60–80 kg/ha. In the high-altitude tropics, oat is usually sown at the onset of the rainy season. When grown for forage, oat is sometimes grown mixed with vetches (Vicia spp.) or pea (Pisum sativum L.).

The vigorous growth of oat seedlings and the release of allelopathic compounds depress weed growth. Hand-weeding (usually once) and application of broadleaf herbicides such as 2,4-D may be used for weed control. In Ethiopia farmers do not weed their oat fields. Oat fields are seldom fertilized in tropical Africa, although the crop responds well to application of NPK. In the Ethiopian highlands the general recommendation is to apply 18–23 kg N and 20–30 kg P per ha at sowing, and 35–46 kg N per ha top-dressing at tillering. Oat is grown in rotation with barley, wheat, faba bean, pea and sometimes with fallow or a green manure. Allelopathic compounds can hinder the growth of subsequent crops, if they are sown within about 3 weeks after the harvest of oat. In Kenya an oat crop may be grazed 1–2 times, before it is allowed to mature as a grain crop. Alternatives are 2–4 grazings of a crop in a season, 2 grazings followed by use as a hay crop, or 1–2 grazings followed by a hay crop and a grazing. Oat can be grazed within 6–8 weeks after sowing.

In Africa oat is harvested manually by sickle or scythe, for forage normally after heading, and for grain when the seed is in the hard dough stage, which is normally at the end of the rainy season. The harvest is left in the field for sun-drying and is subsequently threshed (grain crop) or piled (forage crop). A mechanized combine can be utilized for harvesting large-scale grain oat crops or a mower for forage oat crops. When oat straw is needed for roofing, the panicle is harvested by sickle for grain, after which the remaining stubble is harvested by sickle or scythe at ground level.

The world average grain yield of oat is about 2 t/ha with straw yields of about 5.5 t/ha. As the result of threshing is not a naked grain, the hull (lemma and palea) generally accounts for 25–35% of the total grain weight. The average oat grain yield in Ethiopia and Kenya is about 1 t/ha. When oat is harvested for green fodder, hay or silage the dry matter yield is 4–15 t/ha.

Oat grain should be dried to a moisture content of 12–14% before storage, with a storage temperature below 20°C. In industrialized countries oat grain processing generally involves cleaning, drying (to partially inactivate lipolytic enzymes which would result in rancidity), hulling, cutting, steaming (to complete inactivation of lipolytic enzymes) and flaking or milling. The cheapest way of conserving oat forage is hay making. In areas where hay making is difficult, oat can be made into silage, either alone or mixed with legumes.

The major objectives in oat breeding are improved grain and forage yields. The development of cultivars resistant to fungal and viral diseases, especially crown and stem rusts, is important too. Sources of resistance to crown rust are found in wild Avena species, especially Avena sterilis. Modern techniques of breeding have resulted in improved cultivars with desirable traits such as resistance to diseases, high yield, huskless (‘naked’) grains, white-coloured large grain, and high contents of protein and oil in the grain. Molecular marker maps have been constructed and a genetic transformation system has been developed that allows the insertion of foreign genes into oat using particle bombardment. In tropical Africa there are small-scale breeding activities in Ethiopia and Kenya, mainly focusing on resistance to diseases and increased forage and grain yields. In Ethiopia and Kenya farmers are mainly interested in dual-purpose cultivars.

Due to its tolerance to poor soil fertility and to frost, its low requirements of external inputs such as fertilizers, and its dual-purpose character (food and fodder), oat has favourable prospects in the highlands of tropical Africa, especially for resource-poor farmers. On a worldwide scale, oat also has potential for pharmaceutical and cosmetic uses.