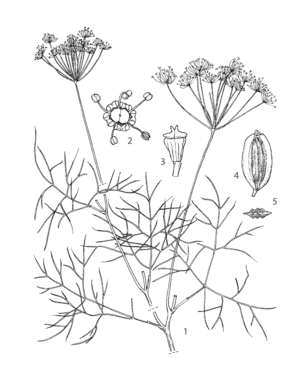 The origin of dill is not known; it is thought to be native to the Mediterranean and to South and southwestern Asia. Now it is cultivated, usually in home gardens, all over the world, including South-East Asia. Sometimes it escapes from cultivation and naturalizes.

The green parts and the fruits of dill have been used since ancient times both as a culinary and as a medicinal herb. It has a pleasant aromatic odour but a slightly bitter and pungent taste. Finely chopped fresh or dry leaves and young inflorescences are used as a culinary herb in soups, salads and sauces. Inflorescences and ripe fruits are used to flavour pickled cucumbers, onions, vinegar, sauces, pastries and bread; in India the fruits are an ingredient of curry powder.

Dill oleoresin is a concentrated aromatic powder, obtained by extracting the fruits with alcohol and then drying the extract; it is especially recommended for low-salt or salt-free diets. Essential oils can be steam-distilled from the green parts (dill herb oil, dill weed oil) and from the fruits (dill seed oil). In the United States the regulatory status "generally recognized as safe" has been accorded to dill (GRAS 2382), dill herb oil (GRAS 2383) and dill seed oil (GRAS 2384). Dill herb oil is mainly used for flavouring and seasoning in the food industry and has largely replaced the whole herb. Dill seed oil, usually in the form of dill water (distilling one part of fruits with 20 parts of water), is used medicinally to alleviate digestion problems, especially of children. Dill oil is said to be strongly antiseptic; it inhibits the activity of several fungi and in mice it shows anticarcinogenic properties. Dill fruits have been shown to be spasmolytic and bacteriostatic for dyspeptic disorders. Bruised and boiled in water and mixed with dill roots, dill fruits are applied externally against swellings of the joints. In general dill is said to have carminative, stomachic, stimulant, diuretic, resolvent, emmenagogue and galactogogue activity. Extracted dill parts are used as cattle fodder. Fresh and dried inflorescences and infructescences are increasingly being used in the ornamental flower industry.

Worldwide the cultivation of dill for its fruit is most important; the largest producers are India, Pakistan, China, western Russia and surrounding republics, Hungary and Egypt. Major users are the United States (about 600 t annually), Japan (50 t) and Germany (30 t). Worldwide annual production of dill seed oil is estimated at 50 t with a value of US$ 0.3 million. Dill herb production (mostly fresh, sometimes dried or freeze-dried) is predominantly small-scale in gardens all over the world, including South-East Asia, but no statistics are available. Larger scale production in Europe is known from Scandinavia and Germany (200 ha). Worldwide annual production of dill herb oil is estimated at 100-150 t with a value of about US$ 1 million. The largest producers are the United States (1000 ha), China and Australia.

Dill essential oil is colourless or pale yellow when freshly distilled. The chief components of dill herb oil are phellandrene (35%) and 3,9-epoxy-p-menth-1-ene (25%), of dill fruit oil limonene (up to 70%) and carvone (up to 60%) (limonene and carvone are closely related; together they represent about 95% of the oil). Carvone can be applied as germination suppressor, e.g. in potatoes. The essential-oil composition of dill varies strongly with geographical origin, cultivar and maturity of the extracted part, e.g. carvone content in fruit oil ranges from 50-60% in the United States and 35-60% in Europe. Wide differences in data on the composition of the essential oil can also partly be explained by different extraction and distillation methods. After oil extraction, the fruits contain approximately 15% protein and 16% fat, and are used as cattle fodder. Monographs on the physiological properties of the dill oils have been published by the Research Institute for Fragrance Materials (RIFM).

Dill herb oil is frequently adulterated with d-limonene, which is obtained in the preparation of sweet-orange oil concentrate, and with synthetic carvone.

Seeds take 2-4 weeks to germinate, flowering starts about 2-3 months after sowing, and ripe seed is harvested 5-6 months after sowing, but wide fluctuations are possible depending on climatic circumstances, cultivar, available nutrients and water. Flowering and fruiting are extended over a long period per plant. Because dill flowers are strongly protandrous cross pollination and fertilization seem normal; the flowers are well visited by bees and flies.

Dill grown under full sun produces significantly more leaves, a larger leaf area and a higher herb yield than plants that receive only 30-70% of natural light. Flower-bud development is also faster and the oil concentration almost 6 times higher than in plants grown under reduced light levels. The essential-oil content in the fresh herb increases gradually with advancing growth and development, peaking at the young-fruit stage, and then declining until seed maturity.

Dill is a very variable plant species and several botanical subclassifications have been made on the basis of different sizes and forms of the plants, leaves and fruits. The major differences, however, are found in cultivated plants, so a subclassification into cultivar groups would be more appropriate. Unfortunately, no such classification exists. Dill grown in India belongs to a different cultivar group than dill grown in Europe or America (it has often been classified as a separate species, Anethum sowa). Its inflorescence has fewer primary rays, its fruits are less flat but longer with more prominent ridges, and the essential oil from the fruits is different (less carvone but containing dillapiole which is absent in European dill). The Indian type of dill predominates in South-East Asia.

Several chemotypes of dill have been distinguished on the basis of the essential oil: chemotype 1 contains limonene, carvone, myristicin and dillapiole; in chemotype 2 myristicin is absent, whereas in chemotype 3 limonene and carvone are the only major components.

Dill much resembles fennel (Foeniculum vulgare Miller); it can be distinguished by its smell (dill smells bitter, slightly pungent, fennel smells like liquorice), by its fruits (dill fruits are lens-shaped and narrowly winged, fennel fruits are not as flat and are not winged) and by the average length of the secondary rays in the umbel (longer in dill).

Dill is primarily a summer crop of temperate climates. It is generally considered a long-day plant in terms of flower initiation, with a critical period of 11-14 hours. Some reports, however, indicate that dill is probably day-neutral, long-day conditions merely enhancing anthesis. In the tropics it can successfully be grown up to altitudes of 2000 m. The annual rainfall or water requirement (irrigation) ranges from 500-1700 mm. It does not tolerate wet conditions or frost and thrives in full light at monthly average temperatures of 16-18°C. Minimum temperature for growth is about 7°C. It prefers a sandy loam soil with pH 5.6-6.5.

Dill is easily raised from seed. Seeds remain viable for 2-3 years without special storage measures and the germination rate is about 75%. In temperate climates seeds are sown in early spring, or, in areas with very hot summers, towards the end of the summer. Seeds are sown directly in the field (which should have been thoroughly cultivated and be weed-free) at a depth of 3-6 mm. In India, the soil is often enriched with farmyard manure before sowing. The sowing rate is 5-7 kg seed per ha. Germination occurs in about 1-3 weeks (faster at higher temperature). When grown for seed, optimum row and plant spacings are 45 cm and 10 cm respectively; dill grown for the herb is sown at higher densities (e.g. 15 cm and 10 cm respectively). Mostly, however, dill grown as a garden crop is intercropped, e.g. between onions, parsley or carrots.

Frequent weeding and regular water supply are essential for good growth. To maximize essential-oil yield, an application of 80 kg N, 30 kg P and 30 kg K per ha is recommended. When grown for seed, windbreaks should be established to prevent lodging. A crop rotation of 4 years is recommended.

Between the early seedling stage and flowering, dill is often attacked by the fungus Erysiphe anethi, which can be controlled by spraying with a copper-containing fungicide at intervals of 7-10 days. Root rot, caused by a Fusarium sp. can lead to serious damage. Prolonged wet weather in temperate climates encourages the fungi Fusarium culmorum, Pythium sp. and Rhizoctonia sp., which can destroy the crop; control is not possible; the only possible measure is to grow a crop that can easily be wind-dried (not too dense, sparingly supplied with N). Wet weather at flowering stage can cause fungal attack of Botrytis sp. and Alternaria sp. which prevent fruit set. Virus infections and insect pests (lice and caterpillars) are possible but are seldom very serious. Larvae of the chalcid fly Systole albipensis may infest fruits.

The moment of harvesting depends on the required product. For dill herb (foliage), harvesting usually takes place before flowering, about 40-50 days after sowing. For the production of herb oil, dill is cut immediately after flowering, when the seed has just started to ripen but is not yet fully developed. As this period is very short, planting should be staggered to enable the harvesting of larger areas at the proper stage of maturity.

Fruits are harvested at a stage when they are fully developed but still green, i.e. 7-9 days after petal drop (oil content 2.6-3.7%). When the colour changes from green to dark grey, the oil content decreases to about 1.7%, i.e. 22-24 days after petal drop. At this stage profuse shedding takes place resulting in substantial yield losses.

The yield of fresh dill herb varies from 3-20 t/ha, while dill seed yields range from 0.7-1.2 t/ha. Essential-oil yields of dill herb and dill seed are estimated at 56 kg/ha and 30 kg/ha, respectively. The yield of dry dill herb is about 10% of the fresh product.

Dill herb is marketed fresh for culinary use. To maintain its keeping quality, the fresh herb can be put in sealed, polythene bags in cartons and kept at low temperatures (6-12°C). Fresh dill may be chopped and frozen with water in ice cube trays. When it is to be marketed in dried form, the drying temperature should be 80°C initially, lowered to 40°C halfway through the drying process. The dried product should have a minimum essential-oil content of 0.15% and maximum contents of water and ash should be 8% and 6%, respectively.

For herb-oil production, it is advisable to harvest only as much fresh plant material as can be distilled during one day. Prolonged drying in the field results in considerable loss of oil by evaporation, especially of the more volatile terpenes. Moreover, fruits still attached to the harvested plant material continue to ripen, and the oil thus obtained approaches the composition of dill seed oil, which is undesirable in dill herb oil. Therefore, plant material should be distilled as fresh as possible or dried for a very short period.

For seed production harvested plants are dried under shade and fruits are threshed out in regular threshers. Threshed fruits should be spread out in a thin layer and turned over frequently until thoroughly dry. When dill seed oil is desired, the fruits are crushed between heavy cylinders, mixed with water and then distilled.

Institutional germplasm collections are rare (82 accessions at the North-Central Regional P.I. Station of the United States Department of Agriculture) and breeding programmes of dill are not known to exist. Even officially released cultivars do not exist. Seed firms in Europe market their own, unofficial selections. Some examples of selections for herb production are Dukat, Superdukat, Mammut and Pikant (Scandinavia), Mammoth (United States), Sari, Herkules, Goldkrone, Prager and Tetra-dill (Germany), Budakalaszi (Hungary). No special selections are known for dill seed production, although some of the herb selections are recommended for that purpose.

Worldwide, dill production and utilization is increasing very slowly. It is inadvisable to recommend expansion of production, because a small market can easily become glutted, resulting in very low prices. Dill will primarily remain, also in South-East Asia, an easily grown home-garden herb, which anybody harvests from the garden according to one's needs.