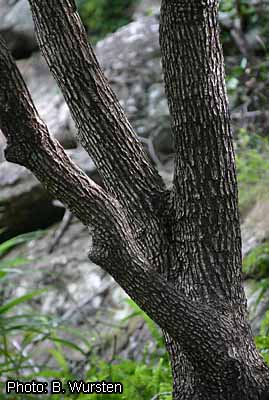 The wood, known as ‘Lebombo ironwood’ or ‘mecrusse’ in south-eastern mainland Africa and as ‘merana’ in Madagascar, is in demand for poles in house and bridge building because of its durability, and also for flooring, stairs, laths, fences, mine props and railway sleepers. It is valued for furniture for both indoor and outdoor uses, and for sculptures and turnery. It is suitable for vehicle bodies, sporting goods, toys, novelties, agricultural implements, musical instruments, precision equipment, carvings, pattern making and draining boards. The wood is also used as firewood and for charcoal production. Livestock browses on the leaves.

The wood of Androstachys johnsonii is rarely traded, probably because of limited supply, and is mainly used locally. However, in 2005 it was one of the most exploited timber species in Mozambique.

The heartwood is pale brown to golden yellowish brown or pale reddish brown, with darker markings, and indistinctly demarcated from the whitish yellow, 1–1.5 cm thick sapwood. The grain is usually straight, occasionally wavy, texture fine and even. The wood is greasy to the touch.

The wood is fairly easy to saw and work in spite of its hardness. It finishes well, showing a nice polish. It holds nails and screws well, but pre-boring is needed. It is easy to glue and is considered excellent for turnery. It is very durable. In South Africa poles used for huts showed no sign of deterioration after 40 years. The wood is resistant to fungal, termite, Lyctus and marine borer attacks. It is resistant to impregnation with preservatives.

The flowers provide nectar for honey bees, but it has been recorded that the honey is poisonous and has a purgative action. Several diterpenoid constituents have been isolated from the heartwood.

Apart from Androstachys johnsonii, 4 other species have been described in Androstachys, all from Madagascar. These differ in having digitately compound leaves, stipular sheaths fused to the petioles, more hairy anthers and pointed fruits, and have been referred to a separate genus Stachyandra, although this is questionably distinct. The wood of these species is reportedly also hard and durable, and occasionally used in construction.

Androstachys johnstonii grows very slowly. It shows monopodial growth. Trees lose their leaves irregularly. In south-eastern mainland Africa, trees flower in October–November and ripe fruits can be found in November to March. The flowers are wind-pollinated. The fruits are eaten by small antelopes, squirrels and birds, and these animals may disperse the seeds.

Androstachys johnsonii occurs gregariously in deciduous woodland, often on rocky hillsides and stony outcrops, also along seasonal rivers but on well-drained soils, up to 1000 m altitude. In Swaziland it is locally dominant in dry forest where some cloud cover prevails. Young plants are not frost tolerant.

Seeds germinate readily, and young plants are hardy and can survive in quite dry and warm localities. Trees are often surrounded by numerous seedlings.

Large boles may be hollow. They are difficult to cut because of the hard wood.

Androstachys johnsonii is locally common and may even form dense thickets. However, in several areas larger trees have been exploited heavily for their wood, and already in 1957 an area of nearly 20,000 ha was designated in Mozambique as reserve (Baixo Pinda Forest Reserve) to protect the coastal forest and enable the recovery of Androstachys johnsonii. However, since then the reserve has been subject to severe forest clearance for agriculture. The Matibane Forest Reserve, also in Mozambique, has an area of about 4200 ha, for a large part covered by Androstachys johnsonii.

It seems unlikely that Androstachys johnsonii will increase in importance on the timber market because it has a limited area of distribution and grows very slowly. However, as long as stands of sufficient extent exist, it will locally remain of importance for heavy and durable construction. Monitoring of populations is recommended.