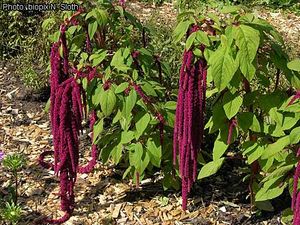 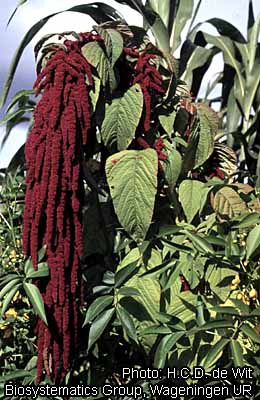 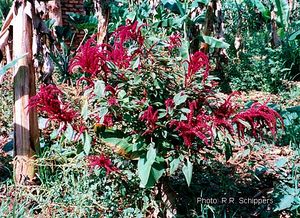 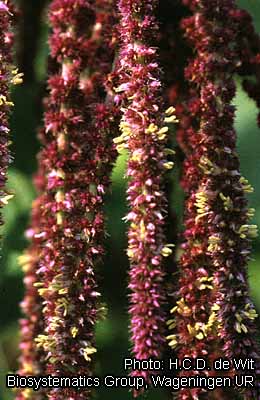 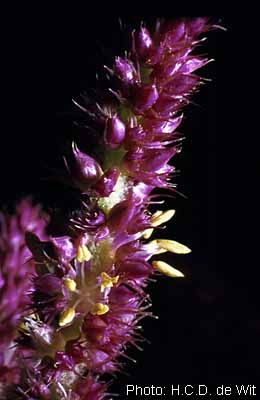 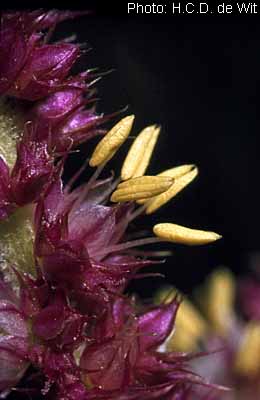 Amaranthus caudatus is not known from the wild. It originated in the Andes, possibly as a hybrid between the wild Amaranthus hybridus L. subsp. quitensis (Kunth) Costea & Carretero and the cultivated Amaranthus cruentus L. (originating from Central America). Amaranthus caudatus has long been grown as a food crop in the Andes, e.g. by the Incas, and the greatest genetic variation occurs in this area (Ecuador, Peru, Bolivia and Argentina). The earliest archaeological evidence of its cultivation dates from 2000-year-old tombs in north-western Argentina. The chronicler Cobo wrote in 1653 that in the city of Guamanga (now Ayacucho) delicious sweets were prepared from amaranth and sugar. Amaranthus caudatus was introduced into Europe in the 16th century and it was spread to Africa and Asia later. The cultivated area has notably decreased over the years, but Amaranthus caudatus has remained a grain crop in Ecuador, Peru, Bolivia and Argentina. It is occasionally grown as a grain crop in Asia and Africa. As an ornamental it is grown throughout much of the tropics and in some temperate regions.

The exact distribution of Amaranthus caudatus in Africa is not known, because it has often been confounded with other Amaranthus species. It is grown in Ethiopia and Eritrea for its grain and as an ornamental; it has also been grown in Uganda and Kenya and has been recorded from several other countries in Central, East and southern Africa, and the Mascarene Islands, where it may also be found as a weed escaped from cultivation.

Amaranthus caudatus seeds are toasted and popped, ground into flour or boiled for gruel. For making leavened foods, they must be blended with wheat. The seeds are fermented to make alcoholic beverages, e.g. beer (‘tella’) in Ethiopia. In Ethiopia cooked seeds are made into porridge, and ground seeds are mixed with tef to prepare pancake-like bread (‘injera’).

Seeds can be sprouted for use as a nutritious vegetable. The leaves are eaten as a vegetable like those of other amaranth species, e.g. in Peru and Ethiopia. Harvest residues are used for feeding livestock and for thatching. In South America grain amaranths are traditionally used in medicine, folk festivals, and as dye sources. In Ethiopia the root is used as a laxative, and the seed for expelling tapeworms and for treating eye diseases, amoebic dysentery, and breast complaints. In India the plant is taken as a diuretic and it is applied to sores. Amaranthus caudatus is widely grown as an ornamental (‘Love-lies-bleeding’).

Amaranth grain is renowned for the excellent quality of its protein because of the high lysine content. Gluten-free types exist and are suitable for people with coeliac disease. The starch mainly consists of amylopectin, with only 5–7% amylose. The rather small starch granules (1–3 μm in diameter) have drawn wide attention for industrial uses of grain amaranths. The oil contains 4–11% of the triterpenoid squalene, which may find a niche market in products such as lubricants in the computer industry and in cosmetics. The stems, leaves and seeds of Amaranthus caudatus contain water-soluble red-violet betacyanin pigments. In aqueous plant extracts they consist on average of 81% amaranthine and 19% isoamaranthine; in dried extracts of 67% amaranthine and 33% isoamaranthine. Dissolved in water the pigments are unstable except at low temperatures in the dark and in the absence of air; dried pigments are very stable at room temperature. The seed also contains red-coloured lectins sometimes also referred to as amaranthine. Two peptides isolated from the seed of Amaranthus caudatus (Ac-AMP1 and Ac-AMP2) have shown strong antifungal and some antibacterial activity.

Amaranthus comprises about 70 species, of which about 40 are native to the Americas. It includes at least 17 species with edible leaves and 3 grain amaranths. Amaranthus caudatus is part of the so-called Amaranthus hybridus aggregate, a group of species in which taxonomic problems are far from clarified, especially because of common hybridization and names often being misapplied. Some recognized species of this aggregate are cultivated taxa. Amaranthus caudatus is one of these, as are the other grain amaranths, Amaranthus cruentus L. and Amaranthus hypochondriacus L., which are included in PROTA 2 ‘Vegetables’. Amaranthus caudatus can be distinguished by its usually long and pendant terminal spike and comparatively broad tepals of female flowers. A classification in cultivar groups might be more appropriate for the cultivated taxa.

Amaranthus caudatus shows a wide genetic variation and diversity of plant form, ranging from erect to completely decumbent. Two types have been distinguished: subsp. caudatus, the main type, and subsp. mantegazzianus (Pass.) Hanelt, grown as a grain crop in the valleys of the Andes in north-western Argentina. The latter can be distinguished by its determinate club-shaped inflorescence branches, due to a single recessive gene. According to some, it should be considered as a separate species Amaranthus mantegazzianus Pass., an opinion which has recently been supported by the results of seed protein studies.

Germination of Amaranthus caudatus seed accelerates with increasing temperature in the range 5–35°C; no germination occurs at 0°C. Seedlings normally emerge 3–5 days after sowing and early growth is slow. Flowering begins 60–110 days after emergence. Outcrossing rates of 6–29% have been recorded in Amaranthus caudatus. The total crop duration in Peru ranges from 3–4 months at 1800 m altitude to 9 months at 3200 m altitude; in Kenya it is normally 80–90 days. A single plant may yield more than 50,000 seeds. Amaranthus caudatus is a C4-cycle plant, giving higher yields at higher light intensities and temperatures, and being efficient in water use.

In the tropics Amaranthus caudatus performs well under cool, dry highland conditions. It is more tolerant to chilling than the other 2 grain amaranths and is grown at higher altitudes. In East Africa it is found at 500–2500 m altitude, in South America at 1000–3200 m. In Peru it is grown in regions with an average annual rainfall of 550 mm. The photoperiodic response is marked, with flowering being promoted by short photoperiods.

Amaranthus caudatus can be grown in sandy and clay soils. In general grain amaranths prefer well-drained neutral or alkaline soils (pH > 6), but some types are well adapted to acid and mildly saline soils.

Amaranthus caudatus is propagated by seed. Its 1000-seed weight is 0.5–1.1 g. Seed scarification with concentrated sulphuric acid or sandpaper enhances germination. Common seed rates in Peru are 8–18 kg/ha, but in Kenya seed rates of only 1–2 kg/ha are common. With improved cultivars in Peru densities of 400,000–500,000 plants/ha gave the highest yields. Emergence of seedlings is best when the seed is sown at a depth of 1–1.5 cm, but in dry, hot areas deeper sowing may be necessary. However, emergence is seriously lowered if the sowing depth exceeds 5 cm.

Amaranthus caudatus is grown in sole cropping as well as in intercropping systems, e.g. with maize in South America and Ethiopia. Sometimes it is planted as a guard-row for a main crop, e.g. bean, maize or millet. In Ethiopia the plants are sometimes allowed to sow themselves.

Once they are established, grain amaranths compete well with weeds, but they must be weeded at least once during the first month. Hilling the plants when they are about 30 cm tall helps to control weeds and to reduce lodging; it may also control Alternaria disease. In Peru Amaranthus caudatus is sometimes grown with supplemental irrigation. Results of fertilizer trials are inconclusive, and in general grain amaranths grow well under widely differing nutrient levels. In Peru manure is usually applied.

Harvesting of Amaranthus caudatus is difficult because of asynchronous ripening. The crop may be harvested once-over by cutting the inflorescences when the plants are still green, to avoid seed shattering. In Peru the plants are cut at ground level with a sickle, bundled, and left to dry in the field for 1–2 weeks. In dry, irrigated areas senescence can be induced by stopping irrigation 2 weeks before the harvest. Leaves may be harvested once or several times to be used as a vegetable, before the grain or total biomass is harvested at maturity for food or forage.

After drying in the field, the plants are threshed by hand or machine, and the seed is cleaned. Additional drying to reduce the moisture content to 12% may be necessary for safe storage.

Major breeding objectives for Amaranthus caudatus and other grain amaranths are improved harvestability (less lodging, less shattering, better uniformity of maturity), increased seedling vigour, increased resistance to pests and higher yields. In Peru selection in landraces has led to the release of the Amaranthus caudatus cultivars ‘Noel Vietmeyer’, ‘Oscar Blanco’ and ‘Alan Garcia’. Genetic studies have identified marker loci for traits such as pigmentation patterns, inflorescence morphology and seed characters in Amaranthus caudatus and other grain amaranths. Research is needed on hybridization barriers among grain amaranth species as well as on the biosystematic identity of the species; only then can the information be indisputably related to species.

In tropical Africa Amaranthus caudatus is presently cultivated on a very limited scale and, like the other grain amaranths, it probably does not have much future as a grain crop, because it cannot compete with cereals that are more productive and easier to grow. On a worldwide scale grain amaranths have some potential, because of their favourable agronomic characteristics, excellent nutritional qualities and diverse food and technical applications. Amaranths are also considered to have prospects in food colouring.