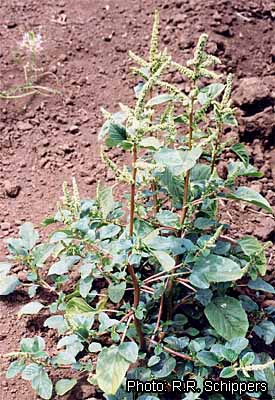 Amaranthus blitum is a cosmopolitan weed, spread over the world from the tropics to temperate areas such as Japan and Western Europe, in some areas reported as rather noxious. It probably originates from the Mediterranean region. It has been recorded for many African countries, and probably occurs throughout tropical Africa, from Senegal to Ethiopia, South Africa and the Indian Ocean islands. It is mostly a protected weed in backyards and home gardens, and sometimes produced for sale at the market. It is cultivated in Central Africa (Cameroon) and East Africa (Kenya, Uganda). The cultivated type probably originates from India where it still is an important vegetable. It is a popular home garden vegetable in south-eastern Europe, e.g. in Greece where it is used as a substitute for spinach (Spinacia oleracea L.) during the hot dry summer months.

The main use of Amaranthus blitum is as a cooked leaf vegetable. In most African countries it is collected as a pot herb from the wild, and is very much liked for its soft taste. Leaves are sometimes preserved by drying. Vegetable amaranths in general are recommended as a good food with medicinal properties for young children, lactating mothers and for patients with fever, haemorrhage, anaemia or kidney complaints. The leaves are used as a febrifuge and poultice to treat inflammations, boils and abscesses. In Nigeria Amaranthus blitum is used as a medicine against lung disorders. It is used as fodder but only as a rather moderate part of the daily portion.

Amaranthus blitum is important in East Africa as a frequently collected wild plant and a popular vegetable in home gardens. The economic value as a market vegetable is limited, since market growers prefer the more productive Amaranthus cruentus L. and Amaranthus dubius Mart. ex Thell. No international trade has been reported, but probably it is occasionally imported as a vegetable by Western countries from India or East Africa.

The composition of Amaranthus blitum is comparable to that of Amaranthus cruentus, samples of the former analyzed in India showing about the same composition. The moisture content and composition show large variations as a function of plant age, ecological conditions and cultural practices such as fertilizing. The composition of Amaranthus leaves per 100 g edible portion (89%) is: water 88.9 g, energy 75 kJ (18 kcal), protein 3.5 g, fat 0.3 g, carbohydrate 0.3 g, dietary fibre 2.6 g, Ca 270 mg, Mg 130 mg, P 65 mg, Fe 3.0 mg, carotene 1725 μg, thiamin 0.07 mg, riboflavin 0.22 mg, niacin 0.7 mg, folate 85 μg, ascorbic acid 42 mg (Holland, B., Unwin, I.D. & Buss, D.H., 1991). The dry matter content is high and ranges from 9–22%; the protein content is also high, ranging from 20–38%. The amino acids in the leaf proteins include methionine and other sulphur-containing amino acids. The content of essential micronutrients, especially calcium, iron, carotene, folate and ascorbic acid, is high compared with other leaf vegetables. The calcium is partly insoluble and not taken up in the digestive tract, as it is bound to oxalate. The bioavailability of the iron is 6–12%. The leaves easily become soft after 5–10 minutes cooking in lightly salted water. Some types contain much anthocyane, a brilliant red pigment that dissolves in the cooking water, which is poured off. The leaves and stems contain the antinutrients nitrate (most in the stems) and oxalate at a level similar to other green leaf vegetables such as spinach (Spinacia oleracea L.) and spinach beet (Beta vulgaris L.). Adverse nutritional effects are not likely where consumption is below 200 g per day. Moreover cooking in ample water removes these toxic components. The rather high content of hydrocyanic acid and oxalic acid makes it less suitable for fresh consumption by humans and is a limiting factor for its use as fodder for animals. Amaranthus blitum seed contains linoleic acid.

Emergence of the seedling takes place 3–5 days after sowing. Vegetative development is fast. Like maize and sugar cane, the genus Amaranthus is characterized by the C4-cycle photosynthetic pathway, which means a high rate of photosynthesis at high temperature and radiation. Flowering may start 4–8 weeks after sowing, making the plant less suitable for consumption. Pollination is effected by wind but the abundant pollen production, especially in the flowers in the upper part of the plant, causes a high rate of self-pollination. Insect pollination also takes place. The first seed matures after 2 months. The plants continue growing for several months before dying.

Vegetable amaranths grow well at day temperatures above 25°C and night temperatures not lower than 15°C. Shade is disadvantageous except in cases of drought stress. Amaranth is a quantitative short-day plant, which is an advantage in the subtropics where the generative stage is retarded during summer. Amaranths like fertile, well-drained soils with a loose structure. The mineral uptake is very high. Amaranthus blitum is fairly resistant to adverse climate and soil conditions.

The seed of Amaranthus blitum is larger than the seed of most other Amaranthus species with about 1000 seeds/g. In the wild and in home gardens the seed of flowering plants scatters and gives rise to new plants automatically. In the dark, the seed may remain dormant for several years. It germinates when it comes at the surface or in the upper soil layer of less than 3 cm. For market production Amaranthus blitum is normally grown as a sole crop on beds. It is also found in intercropping systems with food crops and in home gardens. The common practice in Uganda and in Western Kenya is to sow directly, broadcast or in rows 15–20 cm apart, with a seed rate of 2–5 g/m2. The plants are uprooted after 4–5 weeks. Another cultivation method is sowing in a seedbed (nursery) 3–10 g/m2 and transplanting after 2–3 weeks. From a nursery, the grower gets up to 1000 plantlets per m2 for transplanting. A plant density of 100–200 plants/m2 can be used for a once-over harvest whereas 25 plants/m2 are appropriate for repeated cuttings. In Kenya, Amaranthus blitum is sown in a mixed cropping with other indigenous vegetables like Corchorus olitorius L., in rows 30 cm apart; the seed is mixed with sand for easier sowing.

In home gardens, the only care given to Amaranthus blitum plants is selective weeding. Amaranthus blitum is less fast growing, less susceptible to diseases and pests and more tolerant to drought than the most commonly cultivated amaranth Amaranthus cruentus. Because of the rather strong growth of Amaranthus blitum, which itself displays a weedy character, weeds are not very troublesome, except sometimes nut grass (Cyperus rotundus L.). If rainfall is not sufficient, irrigation by sprinkling should be done before the plants reach their wilting point. Watering every day with 6 mm (6 l/m2) is sufficient. Water shortage causes early flowering, which reduces the yield and the market quality. Amaranth is a very high consumer of minerals. Only modest crops can be produced on poor soils. The mineral uptake and removal calculated for an Amaranthus crop yielding 25 t/ha is 125 kg N, 25 kg P, 250 kg K, 75 kg Ca and 40 kg Mg. Larger quantities of N and K are easily absorbed as luxury uptake if these elements are abundant. Amaranth responds to high rates of organic fertilizer. On poor soils, the application of 400 kg/ha of NPK 10–10–20 in addition to 25 t of organic manure is recommended. A split application is recommended during the rainy season. Nitrate-N is better than ammonium-N. Amaranth does not seem to need to be rotated with other crops since no serious soilborne disease has been observed.

Stemrot caused by the fungus Choanephora cucurbitarum is the main disease. It is favoured by wet conditions, poor soil fertility and high nitrogen doses. Chemical control by repeated spraying with fungicides such as maneb or carbatene reduces the losses, but is seldom applied. Damping-off caused by Pythium and Rhizoctonia may be serious in seedbeds. It is controlled by good drainage. Over-dense sowing should be avoided. Fungicides such as dithiocarbamates have some effect. No damage by virus diseases has been reported. Amaranthus blitum is a natural host for turnip mosaic virus and tobacco leaf curl virus.

Insects are a serious problem for amaranth growers. Caterpillars (Hymenia recurvalis, Spodoptera litura, Helicoverpa armigera) and sometimes grasshoppers are the most harmful. The larvae of the stem borer Lixus truncatulus may cause much damage, sometimes already in the seedbed. The basal part of the plant containing the pupae swells and the plant growth is much retarded. Many other insects such as aphids, leafminers, stinkbugs, mole crickets and mites also attack amaranth but generally cause only minor damage. Commercial growers spray insecticides to dispel insects instead of the traditional control method of spreading wood ash.

Amaranth is not very susceptible to nematode damage.

Harvested plants or shoots are bundled, the roots are washed, and the produce is packed for transport to the market. In markets and shops, it is sprinkled with water to keep a fresh appearance. If uprooted, the vegetable can be kept fresh for some days by putting it in a basin with the roots in the water. It is sold in bunches or by weight. Some people dry the leaves for use during the dry season.

Breeding of Amaranthus blitum as a leafy vegetable has not been reported.

Although perhaps best known as a weed, Amaranthus blitum is recognized as an easy-to-grow, productive, tasty and nutritious vegetable. Research should focus on optimization of cultural practices (integrated pest management to avoid pesticide residues, plant nutrition) and on breeding for a better plant habit and a higher yield.