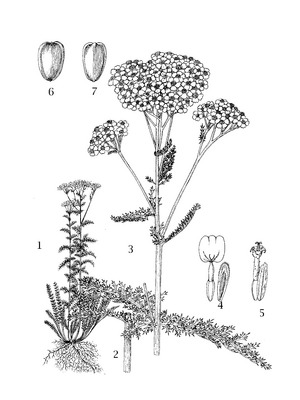 A. millefolium is considered as a complex of difficult-to-separate taxa found primarily throughout the temperate and boreal zones of the Northern Hemisphere and, to a lesser extent, the Southern Hemisphere. It is cultivated, usually as an ornamental, in mountainous areas of some parts of Malesia (e.g. locally in the Philippines and in Java), and is locally naturalized there. It grows wild or is naturalized in Indo-China.

The flowering tops of yarrow (and the herb) are listed in many Western pharmacopoeias. In traditional medicine they are considered to possess antiphlogistic, spasmolytic, stomachic, carminative and choleretic properties. Yarrow is used internally for the treatment of gastro-intestinal complaints (inflammation, diarrhoea, flatulence, cramps, poor digestion), as a bitter aromatic (to counter loss of appetite), to stimulate the secretion of bile (choleretic activity) and to enhance the renal elimination function. In the Unani system of medicine, the flowers are used as abortifacient and emmenagogue. Externally the herb is used in poultices or preparations with alcohol (percolates, fluid extracts) in the treatment of inflammation of the skin and mucous membranes, as well as for healing wounds and relief of itches. In folk medicine, the drug is often employed as a haemostyptic, e.g. in bleeding from haemorrhoids and in menstrual disorders.

The etherial luteolin oil has found widespread use in cosmetic and dermatological preparations. It is also used as a rinse to strengthen the hair, and as a shampoo to prevent baldness. In the form of a bath, yarrow or its oil are applied to remove perspiration.

Yarrow has been reported to be used medicinally in Java, usually as a decoction of fresh flower heads and leaves in water, internally and externally, for the same purposes as in traditional medicine in Europe. Yarrow is often one of the ingredients in herbal mixtures. In India, it is used in a powdered mixture of 18 medicinal plants, which has shown anti-viral activity in mice experimentally infected with encephalitis virus.

Besides its numerous medicinal uses, yarrow has been used as a ceremonial smoke, snuff and beverage by North American Indians, as an occasional substitute for cinnamon or nutmeg, and as a substitute for hops in the brewing of beer. It is a common ingredient of herbal candies. Yarrow is commonly planted as an ornamental, particularly the forms with reddish flowering heads.

Yarrow is grown commercially in Albania (700 kg/year) and Hungary (100 kg/year) and in small quantities in the northern United States and Canada. The quantity of oil produced annually is less than 1000 kg worldwide.

Approximately 150 different compounds have been isolated and identified from yarrow. The essential oil (content 0.2% to more than 1%) has been much investigated chemically because of its pharmacological properties. The essential oil is found in different concentrations in all aboveground parts of the plant: the leaves, however, contain less than the flower-heads. It contains sesquiterpene lactones which are precursors of azulenes (proazulenes, e.g. achillicin); upon steam distillation, they yield azulene and chamazulene. Oils rich in azulene and chamazulene (up to 51% of the oil) have a characteristic deep blue colour. Other sesquiterpenes include achillin, achillifolin, matricarin, millefin, dihydroparthenolide, germacrene D (up to 54%), β-caryophyllene (up to 8%), balchanolide, and farnesol. The monoterpenes present in the oil include, depending on the origin of the oil: terpinen-4-ol, terpineol, α-pinene (up to 2% of the oil), β-pinene (up to 10%), 1,8-cineole (up to 6%), sabinene (up to 17%), myrcene (up to 15%), camphor (up to 7%), linalool (up to 26%), β-thujone (up to 14%), α-thujone (up to 20%), α-phellandrene (up to 12%) and limonene (up to 3%).

Several monoterpenes and sesquiterpenes have been identified in the essential oil from plants from Greece, with ascaridole as the main component (47%) and lesser amounts of 1,8-cineole (10%), p-cymene (7%), α-terpinene (7%) and camphor (8%); other populations from Greece had camphor as the main constituent (22%), with smaller amounts of 1,8-cineole (12%), lavandulol (7%) and borneol (8%), and small amounts of another 80 compounds.

The roots of A. millefolium are reported to contain polyynes (e.g. pontica epoxide) and alkylamides (e.g. undeca-2E,4E-diene-8,10-diynoic acid isobutylamide). Other nitrogen-containing compounds isolated from the herb include betaine (0.05%), betonicine (= achilleine = L-(-)-hydroxystachydrine, a compound with reported haemostatic activity) and L-(-)-stachydrine. Triterpenes, saponins, coumarins (0.35%) and tannins (3-4%) have also been reported.

The anti-inflammatory and antispasmodic effects have been confirmed in respectively a mouse-footpad oedema model and an isolated rabbit-ileum model. These properties are tentatively attributed to the flavonoids, which are known to have such activity, but azulene and related compounds have also been claimed to possess anti-inflammatory together with antipyretic activity. The mechanism of anti-inflammatory activity has been suggested by the synthesis of anti-prostaglandin. Sesquiterpene lactones exhibit interesting biological effects, including antimicrobial and cytotoxic and anti-cancer activity. The methyl esters of the sesquiterpenes achimillic acid A, B and C (isolated from A. millefolium flowers) were found to be active against mouse P-388 leukaemia cells in vivo.

Ascaridole (a monoterpene-peroxide) and Œ±lfa@-peroxyachifolide (a sesquiterpene-peroxide) both showed in vitro activity against malaria parasites (Plasmodium falciparum). The activity of ascaridole is about the same as for artemisinin from Artemisia annua L. The activity of α-peroxyachifolide is much less than that of the latter compound (EC501 μ/ml and 0.01 μ/ml, respectively). Besides the anti-protozoal effects, ascaridole also has anthelmintic activity against Ankylostoma, Ascaris, Necator and Trichuris worms. Thujone is known to possess abortifacient activity.

Yarrow has been reported to contain substances that inhibit seed germination, are antibacterial and act as a mosquito larvicide, and a volatile oil that evokes sex pheromone-like responses in male cockroaches. An ethanol extract of plants from Sweden showed repelling properties against the mosquito Aedes aegypti. The most active compounds were identified as stachydrine, caffeic, chlorogenic and salicylic acids, and the phenolic compound pyrocatechol. These substances seem to be fairly safe for cutaneous application, but more toxicity studies are desirable. Yarrow may induce allergic dermatitis, which is usually attributed to the sesquiterpene lactones such as guaianolide peroxides. Furanocoumarins might be the cause of phytophotodermatitis.

Plants of yarrow reproduce by suckers and consequently usually grow in groups. The suckers develop into rhizomes. Yarrow is an obligate cross-pollinator, and is pollinated by insects. The fruits are distributed by wind.

A. millefolium generally grows in open, unshaded areas ranging from cliffs and alpine pastures to lowland meadows, lawns, roadsides and waste ground. The stems and rhizomes are tough and withstand trampling well; yarrow often grows close to paths and roads. In closed grassland it is usually suppressed by the grasses. Tetraploid populations containing proazulenes have only been found in meadow habitats and not in roadside vegetations and pioneer habitats, where the hexaploid type occurs with little or no proazulenes. Shoot height and aboveground fresh matter decrease sharply on acid soils.

In South-East Asia, yarrow is locally naturalized in grassy habitats, such as roadsides and lawns, and in mountainous areas.

Yarrow can easily be grown from seed. Vegetative propagation from suckers is also possible.

Friable calli were obtained from hypocotyls of yarrow in Gamborg B5 medium. They were used for the production of cell suspension cultures in the same liquid in the dark supplemented with 1.5 mg/l dichlorophenoxyacetic acid, 0.1 mg/l kinetin and 2% sucrose. Cultures grown as such had a doubling time of 35-40 hours. Analysis of the volatile component produced by yarrow cell suspension cultures showed the presence of monoterpenes and sesquiterpenes, some of them not present in plant extracts.

Presumably, yarrow plants with reddish flowering heads were favoured for cultivation as medicinal plant. Where yarrow is cultivated, seeds are planted in early spring, and the crop is grown as an annual.

There is a considerable variation in the contents of oil and azulene in yarrow, due to provenance of the material, the plant part used, its age, season of collection, climatic and soil conditions, and the inverse relationship between the amounts of oil and azulene produced. In the Ukraine, A. collina cultivated experimentally showed very promising results: 6.3 t/ha of fresh matter, 0.2% essential oil of which 42% azulene. In experiments with yarrow in Brazil, manuring resulted in an average increase of biomass production from 47 to 134 g/plant, and of essential oil yield from 0.04 to 0.15 ml/100 g of fresh flower heads.

After harvesting, yarrow should be wilted for 24-48 hours but kept dry to prevent fermentation. Whole plants are distilled by steam distillation, which takes 6-10 hours. Cohobation is recommended. The oil should be stored in dark containers under cool conditions.

Tetraploid yarrow in the A. millefolium complex contains fair amounts of proazulenes, yielding azulenes upon steam distillation. Except for a few hexaploid populations the essential oil of hexaploids contains no more than traces of proazulenes. Diploid yarrow is reported to lack flavones and flavonols. The widely varying medicinal properties and uses of yarrow in different regions is the result of the occurrence of several genotypes in the A. millefolium complex with different chemical composition.

Western pharmacopoeias prescribe determining the essential oil content (>0.3%) for yarrow and characterizing azulenes in the drug. Only certain taxa and populations within the A. millefolium complex can meet these requirements. The relation between chemical composition, ploidy level and ecological conditions is very complicated and makes standardization extremely difficult. Moreover, unambiguous identification is hampered by the frequent occurrence of hybridization and aneuploids. Yarrow and its properties are poorly known in South-East Asia. Information on the chemical composition is urgently needed. Yarrow is easy to propagate and grow and might be well cultivated in home gardens at higher altitudes in Malesia.