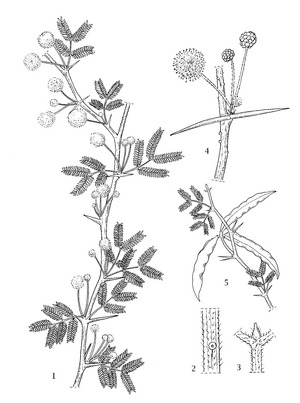 A. farnesiana originated in the northern part of tropical America, where its closest relatives can also be found. It is the most widely distributed Acacia species, introduced to all tropical and subtropical regions of the world for its fragrant flowers and has become widely naturalized and sometimes weedy, e.g. in the southern United States and Australia. In Malesia it was first introduced to the Philippines from Mexico by the Spaniards. It is now recorded throughout South-East Asia. It was first cultivated in Europe in the Hortus Farnesianus in Italy in 1611 and has become an important crop in southern France.

The volatile components of cassie flowers can be extracted by the enfleurage method to yield cassie pomade, but this method is now rarely used. On solvent extraction the flowers yield cassie concrete, which is mostly processed further into cassie absolute. The absolute is used in luxury perfumes to which it lends a unique warmth and woody-floral note. Cassie absolute from concrete is occasionally used in flavours. In very low concentration it imparts a delightful naturalness and body to raspberry flavours.

Cassie absolute can also be prepared from cassie pomade. It is an extremely scarce perfume material that differs in character from cassie absolute from concrete and is not a substitute for the latter. In India a local type of pomade, attar of cassie, is made from cassie flowers.

Flowering branches are sold as cut flowers and are known in commerce as cassie flowers. The seed is occasionally used as a food, e.g. by Aboriginal peoples in Australia, who eat them after roasting. Sprouted seeds are a popular vegetable. The pods, which contain a sweet pulp surrounding the seeds, and the leaves are browsed by livestock in many countries, but the flavour of beef from cattle that have browsed on A. farnesiana is said to be tainted. The flowers are highly attractive to bees.

In some parts of India, the bark and the pods are used for dying and tanning. The gum exuded by the stem is used as a substitute for gum arabic and is considered superior for certain purposes.

The tree is planted worldwide as an ornamental, more extensively in e.g. Egypt, Israel and dry regions of Java. In countries such as India and Iraq and in the Mediterranean it is planted extensively for hedges and wind-breaks. The wood can be used like the wood of Acacia nilotica (L.) Willd. ex Del. in ship building, for carts, farm implements, posts, tool handles and for furniture, as the grain has an attractive appearance. In India twigs are used as toothbrushes. The wood is an excellent fuel, widely used in the Americas.

A. farnesiana has a great number of uses in traditional medicine. The bark has medicinal properties and is employed to treat cough and as an astringent e.g. to treat bleeding gums. In Java cassie flower is used as an emetic and by women after childbirth. In the Philippines it is applied in decoction to treat prolapsed rectum and as an injection for leucorrhoea. A lotion and a poultice of the tender leaves is applied to ulcers and sores previously washed with the decoction. Roots are chewed for sore throat and in decoction they are employed as a remedy for tuberculosis. The tender leaves are bruised with a little water and swallowed against gonorrhoea and affections of the bladder. The flowers are employed in Martinique as a stimulant and antispasmodic. An ointment made from the flowers is used in Mexico as a remedy for headache and their infusion for dyspepsia. The green fruit is very astringent and in decoction it is employed against dysentery and inflammation of the skin and mucous membranes. The pulp of the pods is used in France as a purgative.

Industrial production of cassie flower for perfume started near Cannes in south-eastern France and is still concentrated in that area, with smaller numbers of trees along the neighbouring Italian coast and in Northern Africa. Cassie pomade (attar of cassie) is produced in India but for the local market only. Cassie absolute from concrete is produced in very limited quantities; annual production is in the order of 100 kg only. The absolute is expensive; the world market price is several thousand US$ per kg (1998).

Cassie concrete is a solid waxy, dark yellow or brown mass. On alcoholic extraction it yields 30-35% cassie absolute from concrete. This absolute is a dark yellow to pale brown viscous liquid, clear at about 20°C, but forming waxy flakes when colder. Its odour has a herbaceous-flowery top note, an extremely warm, powdery-spicy, but at the same time floral body and a deep and very tenacious cinnamic-balsamic dry-out. It combines well with a wide range of aroma materials.

As a flavour material it adds naturalness and body to raspberry flavours when used at a concentration only slightly above the minimum perceptible level (0.04-0.08 mg per 100 g). The Food and Drugs Administration of the United States (FDA) classified the absolute as "generally recognized as safe" (GRAS No 2260).

The main volatile components of the absolute from concrete are methyl salicylate, anisaldehyde, geraniol (and derivatives) and benzaldehyde. The characteristic fragrance of cassie absolute is attributed to 3 minor components: 3-methyldec-3-en-1-ol, 3-methyldec-4-en-1-ol and 3-methyldec-4-enoic acid. See also: Composition of essential-oil samples.

The wood is brownish-yellow and has a distinctive, somewhat unpleasant smell. It is heavy (specific gravity 0.8), hard and close-grained and has good durability. The bark has a high content of tannin (30-40%).

Cassie absolute is adulterated with mimosa absolute extracted from the flowers of Acacia dealbata Link and isoeugenol and can be contaminated with extracts of carob tree flowers (Ceratonia siliqua L.). Several synthetic cassie base materials have been developed.

A. farnesiana grows readily from seed and can colonize disturbed areas. Flowering starts about 3 years after planting and plants reach full production at 5-6 years of age. In Malesia, flowering occurs throughout the year, in Central America from November to April, while pods ripen from March to May. In France flowering takes place during September-October, while cv. Semperflorens flowers in April-May too. A. farnesiana coppices well. It fixes atmospheric nitrogen.

The variability of A. farnesiana is great. Two varieties are distinguished based on leaf and pod characters: var. farnesiana and var. guanacastensis Clarke, Seigler & Ebinger. The latter is found from Mexico to Costa Rica. It is distinguished from the typical variety by its longer (7-15 cm), puberulent fruits with uniseriate seeds, larger leaves with 4-9 pairs of pinnae and 21-28 pairs of leaflets, pilose petiole and abaxially pubescent rachis and leaflets.

Several cultivars have been developed in France. Cv. Cavenia, grown in southern France is well known for its tolerance of drought and frost, but its oil is of secondary quality. Cv. Semperflorens is renowned for its vigour and tallness, and requires more care, nutrients and irrigation, but produces 2 harvests of flowers per year.

A. farnesiana is mostly found as a dominant component of secondary vegetation in dry places, but tolerates a wide range of annual rainfall (up to 4000 mm) and prefers a long dry season. Annual rainfall in its habitat in Australia ranges from 150-700 mm. It requires a mean annual temperature of 15-28°C and occurs from sea-level up to 1500 m altitude. Its natural distribution in Malesia is up to 400 m altitude, while in cultivation it grows up to 1200 m. Frost is tolerated to a minimum of -5°C. It is found scattered or in pure, open stands in plains, savanna grasslands, tidal flats, sandy river beds, brushwood, and waste ground, on heavy soils including black clays, loamy or sandy soils with a pH of 5-8(-10). In France, however, A. farnesiana may grow and flower poorly on alkaline soils. It tolerates saline conditions and fire.

Propagation of A. farnesiana is by seed or cuttings. Seed can be stored for long periods without loss of viability because of the hard seed-coat. Good germination is obtained by mechanical scarification. Hot water treatment of seed is recommended in France, but elsewhere has been reported to give disappointing results. In France, seedbeds are prepared on light, fertile soil in spring. Seeds are spaced at 20 cm and covered with about 5 cm soil. Germination takes place after about 1 month. Cuttings are used occasionally.

In France, transplanting is done after 1 year in fields ploughed to a depth of 50-70 cm and well manured. Plants are spaced at 2.5-5 m in open fields. Where low temperatures occur, planting may be done along the walls of buildings or terraces. At planting the main root is cut back and the stem is pruned to about 50 cm. The lower branches are also removed, leaving only a few branches near the top.

Regular weeding is needed after planting. In France all shoots except the main limbs are removed during the first summer after planting. The plants are earthed up at the end of autumn. The next spring, the main limbs are cut back to about 15 cm and all new branches are removed. Plants are subsequently trained to form a vase of 3-4 branches to facilitate harvesting. Later, A. farnesiana requires little care, except soil tillage and earthing-up after harvesting. Fertilizer is applied sparingly, mostly once in 4 years. Annual pruning is done in March-April, taking care not to disturb the soil around the base of the stem. All branches that bore flowers the preceding year are cut back to 10-15 cm. Later, when new shoots are about 10 cm long, all but the most vigorous ones are removed, especially at the end of branches. In mid-summer when branches are 30-40 cm long they are topped to promote flowering.

In Texas A. farnesiana is sometimes managed to form 30% of the vegetation cover in rangeland, as it improves the quality and quantity of winter grass production. More often, however, it is considered a weed. It can be controlled by various herbicides.

Oncideres pustulata causes some damage in Texas by girdling branches, but otherwise no serious diseases or pests of A. farnesiana have been reported.

A. farnesiana comes into full production in France 5-6 years after planting. Trestles are used when picking the flowers, as the branches are rather brittle and are easily damaged. Flowers are picked 1-3 times per week depending on the location and the temperature and only when they are dry.

Formerly, the essential oil of cassie flowers was extracted by macerating the flowers in oil or by the enfleurage method. Both methods involved leaving the flowers in contact with the oil or fat for several hours and replacing them with fresh ones until the oil or fat was saturated with the volatile compounds. The oil was then strained to form cassie pomade. This method is now only very rarely used. Cassie flowers are now mostly extracted with a volatile solvent to yield cassie concrete. The concrete is later mixed with alcohol and distilled to produce cassie absolute; 1 kg of flowers yields 1-4 g absolute. Direct distillation of the flowers yields inferior products.

Only very small collections of germplasm of A. farnesiana exist: e.g. the National Germplasm Repository in Miami (United States) holds 10 accessions. No breeding programmes are known.

As production costs of cassie absolute in France are high and because of the very wide ecological adaptability of A. farnesiana, it seems warranted to investigate the possibility of cultivating it for the perfume industry in other countries, including South-East Asia.