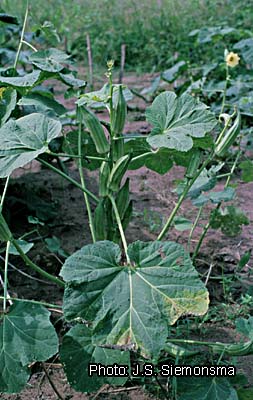 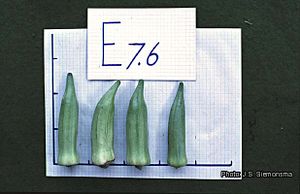 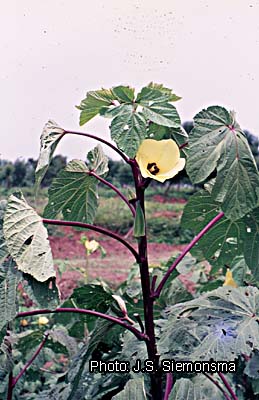 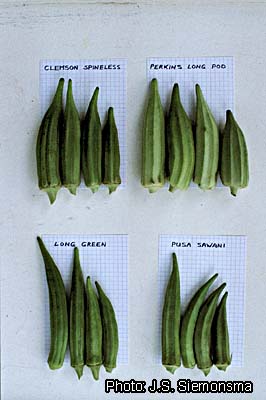 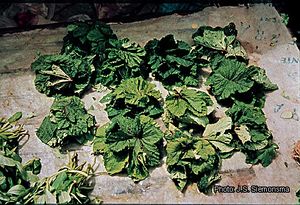 The genus Abelmoschus originated in South-East Asia. Abelmoschus esculentus, however, is a cultigen of uncertain origin. It is widespread in tropical, subtropical and warm temperate regions, but is particularly popular in West Africa, India, the Philippines, Thailand and Brazil. Abelmoschus esculentus has been reported from the whole of tropical Africa, whereas West African okra (Abelmoschus caillei (A.Chev.) Stevels) is restricted to the humid and perhumid climates of Africa.

Young immature fruits are an important vegetable, consumed cooked or fried. In West Africa they are usually boiled in water to make slimy soups and sauces. The fruits can be conserved by drying, whole or sliced, or by pickling. Before selling, the dried product is usually ground to powder. Young leaves are commonly used as spinach. The leaves are sometimes used as cattle feed.

Okra mucilage is suitable for medicinal and industrial applications. It has been used as a plasma replacement or blood volume expander. Leaves are sometimes used as a basis for poultices, as an emollient, sudorific or antiscorbutic and to treat dysuria. Okra mucilage has been added as size to glaze paper and is used in confectionery. The bark fibre has been locally used for fishlines and game traps. It is suitable for spinnning into rope and for paper and cardboard manufacture. Roasted okra seeds are used in some areas as a substitute for coffee.

World production of okra (both species) as fresh fruit-vegetable is estimated at 6 million t/year. Common okra makes up 95% of this amount. It is only in West and Central Africa (accounting for about 10% of world production) that common okra and West African okra are both used. They share the market roughly fifty-fifty.

Carbohydrates are mainly present in the form of mucilage. That of young fruits consists of long-chain molecules with a molecular weight of about 170,000 made up of sugar units and amino acids. The main components are galactose (25%), rhamnose (22%), galacturonic acid (27%) and amino acids (11%). The mucilage is highly soluble in water. Its solution in water has an intrinsic viscosity value of about 30.

Okra seeds contain about 20% protein (similar in amino acid composition to soya bean protein) and 20% oil (similar in fatty acid composition to cotton-seed oil). The bark fibre is easy to extract. It is white to yellow in colour, strong but rather coarse. Tests conducted in China suggest that an alcohol extract of Abelmoschus leaves can eliminate oxygen free radicals, alleviate renal tubular-interstitial diseases, improve renal function and reduce proteinuria.

There are many cultivars of common okra. Some of the better known are ‘Clemson Spineless’, ‘Indiana’, ‘Emerald’ (United States) and ‘Pusa Sawani’ (India), which have been in use for about 30 years.

Flower opening and pollination take place in the early morning. Although basically a self-pollinated crop, considerable cross-pollination by insects may take place. For vegetable use the fruits are picked about one week after anthesis. The regular removal of young fruits permits sustained vegetative growth and flowering, prolonging the productive period. In a seed crop, it takes about one month from anthesis to fruit maturity. In this case, vegetative growth stops soon after anthesis, all assimilates being diverted to the reproductive plant parts.

Abelmoschus esculentus needs temperatures above 20°C for normal growth and development. Germination percentage and speed of emergence are optimal at 30–35°C. Flower initiation and flowering are delayed with increasing temperatures (positive correlation between temperature and number of vegetative nodes). Abelmoschus esculentus is a short-day plant, but its wide geographical distribution (up to latitudes of 35–40°) indicates that cultivars differ markedly in sensitivity. Flower initiation and flowering are hardly affected by daylength in popular subtropical cultivars such as ‘Clemson Spineless’ and ‘Pusa Sawani’. Most tropical cultivars show quantitative short-day responses, but qualitative responses also occur. The shortest critical daylength reported is 12 hours 30 minutes. This explains why flowering of local cultivars of common okra is only quantitatively affected by daylength in the coastal areas of the Gulf of Guinea (5°N). However, more inland at higher latitudes (10°N) one can occasionally observe very tall non-flowering plants of common okra due to a qualitative response.

Common okra tolerates a wide variety of soils but prefers well-drained sandy loams, with pH 6–7, and a high content of organic matter.

Most farmers harvest seed from their own local cultivar or rather heterogeneous landrace. The easiest way to keep the seed is to leave it in the pods. Seed weight varies from 30–80 g/1000 seeds. To soften the hard seed coat, the seed is often soaked in water or chemicals prior to sowing. The seed is usually dibbled directly in the field (1–3 seeds per hole). Optimum plant densities are in the range of 50,000–150,000 plants/ha. Emergence is within one week. When the plants are about 10 cm tall, they are thinned to one plant per hole.

Commercial okra growers usually practise sole cropping, and prefer the early, homogeneous, introduced cultivars. In traditional agriculture, farmers grow their okra landraces in home gardens or in fields with other food crops. In West and Central Africa the landraces often consist of a mixture of Abelmoschus esculentus and Abelmoschus caillei, the former being predominant in dry climates, the latter in humid climates.

Okra mosaic virus (OkMV), transmitted by flea beetles (Podagrica), is widespread in Africa but damage is much less important than that caused by okra leaf curl disease (OLCV), transmitted by whitefly (Bemisia tabaci). Whitefly is also the vector of yellow vein mosaic virus (BYVMV), a major cause of crop failure in Asia. These viruses can only be controlled through control of the vectors. Nematodes of the genus Meloidogyne constitute a major problem. Damage by nematodes is avoided by crop rotation (e.g. with cereals) and by large applications of organic manure.

The earliest types of common okra are ready for first harvest at 7 weeks after sowing. Fruits should be harvested when 7–8 days old. Earlier picking depresses yields because of low fruit weight, but delayed picking depresses marketable yields because over-aged fruits become fibrous. Okra fields are, therefore, harvested at intervals of 2–3 days. The minimum frequency is once a week but then fruits of all sizes have to be picked. Although such a low frequency reduces yield, the very small fruits can fetch a higher price, being of prime quality. For seed production, the whole crop can be harvested once-over. Intensive contact with the slightly hairy fruits and plants may lead to skin irritation.

A vegetable yield of 10 t/ha can be considered a good harvest, but yields of over 40 t/ha can be realized under optimal conditions. Yields are usually low (2–4 t/ha ) as a result of non-intensive growing methods. Seed yields are in the range of 500–1000 kg/ha.

Fresh okra can be transported quite easily in bulk and kept for a few days without much loss of quality. Dried okra is an important product in West Africa. Although usually sliced transversally, longitudinal slicing has been observed in Benue State, Nigeria. Such slices dry well at the edges but start fermenting from the middle, creating a unique flavour. Some countries have a small canning and freezing industry.

Local landraces in Africa are not at great risk of genetic erosion at present. Only commercial growers tend to switch to commercial cultivars of common okra, whereas local landraces of both okra species are ubiquitous in subsistence farming.

In Africa selection and breeding of common okra have only been carried out to a limited scale by the commercial sector. Technisem Seed Company in Senegal distributes improved African cultivars, e.g. ‘Volta’ suitable for the hot and cool season, and the F1 hybrid ‘Lima’ with high tolerance to virus diseases and suitable for export. African farmers have selected an enormous diversity of forms which fit within a great variety of cropping systems. Some of these are available from local seed houses. International breeding work has been oriented towards intensive cultivation with high production in a short period (early maturity, compact plants with short internodes, high-density planting) and wide adaptation (photoperiod insensitivity, resistance to pests and diseases). Crossing between promising parents combined with pedigree selection or backcrossing remains the most common breeding procedure. Several attractive American and Indian cultivars have found their way to commercial growers throughout the tropics and subtropics, but there is still plenty of scope for cultivar improvement in Africa for the commercial sector (where good alternatives for the introduced cultivars are needed with better adaptation to local conditions) as well as for the traditional sector (where hardy, robust, long-lived types are required). Nevertheless, isozyme analysis has shown a rather low level of genetic diversity in cultivated okra in spite of much phenotypic variability. There is little information on improvement using biotechnology apart from in-vitro DNA extraction and plant regeneration from various explants and callus tissue.

The characteristics of both okra species open up new opportunities for recombination. They cross readily in both directions and crosses result in vigorous hybrids; these, however, show a marked reduction in fertility. Nevertheless, seed is formed by interspecific hybrids under conditions of open pollination, probably due to backcrossing with fertile pollen of one of the parental species. ‘Parbhani Kranti’ was bred in this way in India, with YVMV resistance/tolerance derived from Abelmoschus caillei.

Although occurring together in farmers’ fields in West Africa, the genetic integrity of the two okra species is largely assured because chances are very small that the unproductive F1 hybrids will be selected as seed sources for the next crop.

Okra will remain a welcome, productive fruit-vegetable. The relatively recent discovery that West African okra is different from common okra offers new possibilities in an old crop. Okra improvement will also greatly benefit from a better understanding of the phylogeny and species relations within the genus Abelmoschus.